We ask for your consent to the use of cookies, thanks to which we can tailor content and advertising on this website, analyze its impact, improve its speed, and facilitate sharing on social networks. You will find further information, ways to change the settings, and our general commercial terms and conditions here:

This website uses cookies and other network identifiers that may contain personal information. We and our partners access or store this information on your device. This data helps us design and improve our services and develop new services for you. We may also recommend content and show you advertising based on your preferences. Your consent is required for some purposes of processing data collected in this way

Accept all
Essential cookies
Always active
These cookies are essential to enable you to use the site. This category cannot be disabled.
Analytic cookies
These cookies collect information about how you use our website, such as which pages you visit most often. We use all the information collected by these cookies to improve the way our website works.
Google Analytics
This tool from Google allows us to collect statistical data about the users of our website. Thanks to this service, it is possible to track current and historical traffic, user behaviour and characteristics; conversions, sales and more. View Privacy Policy
Accept necessary cookies
Confirm my choices

Modernization was required to the increase capacity of production lines, which have already failed to meet the demand. The first stage of line upgrades was completed in the first quarter of last year, the second stage this spring. Production lines are supplied by Breton, whose technology is among the world's top. At the same time, the lines were adapted for the production of slabs up to 156 centimeters wide, in the so-called Jumbo size. "Production lines are also linked to increased capacity in the sewage treatment plant. In the past year, it was increased by 100 cubic meters per hour to a current flow rate of 350 cubic meters per hour, and the capacity will continue to increase. The total investment in the WWTP is planned at 22 million crowns, "says Technistone Investment Manager Tomáš Duda. The company also cooperates with domestic and foreign specialists in the development of unique portions of manufacturing technology.

At the same time, the entire IT structure of 11 million CZK is being modernized for the management of foreign branch offices. There are 6 million crowns of own distribution hubs ready to ensure faster and more stable product availability.

The Technistone a.s. introduces a new line of products every year in response to a growing market. Over the past year, the share of new products released to the market reached more than 15 percent. This year new shades from the Noble Collection were introduced. Noble Pro Storm, Noble Pro Cloud and Noble Pro Frost are the best-selling shades in the Czech Republic and Slovakia this year. The Czech product, Crystal Balance White is produced in the Czech Republic and only from Czech raw materials. The new materials are visible in an unprecedented number of Czech households. Crystal Balance White has become an ecologically sustainable product that saves natural resources. It eliminates the problems associated with the extraction of natural materials in the quarries and also saves transport costs and thus protects the air. The result is a lower price for a high-quality product that is resistant to everyday use and lasts for several decades with an unaltered appearance. In terms of ecological and economic sustainability, it the natural choice.

Technistone with the original Italian technology Bretonstone was founded in Hradec Kralove in 1997. It has led to the existing Hradecká production of quartz by Bohemiaston, existing since 1992. The headquarters of the company are in Hradec Králové. Worldwide offices are located in the USA, South Africa, Australia, Russia and Poland. The company specializes in the production of durable quartz in the form of slabs, which are then processed in processing capacities around the world for individual products for interior use in the form of, in particular, exclusive counter tops for kitchens, bathrooms, as well as other building elements such as staircases, floors or wall cladding. Significant projects and installations are mainly foreign ones. These are also available at John F. Kennedy International Airport in the US, Terminal 5 at Heathrow Airport in Great Britain, Shopping Mall Milenium in China, the Capisani Hotel in Italy and the Porsche design studio in Weissach in Germany or in many luxury hotels in Dubai. 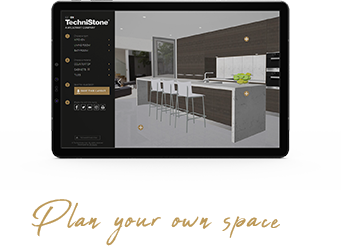 Do you want to know how Technistone® might look in your kitchen, living room, bathroom or anywhere else? Try out our visualizer to get a better idea of using Technistone®. 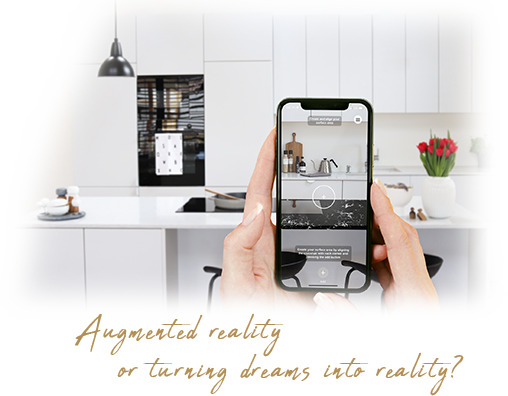 Join the digital world of Technistone and create a new reality around you! Discover new possibilities of using TechniStone® material with our new application Technistone AR. Download for free on the App Store and Google Play!

Do you want to keep up with the latest news from the world of Technistone?

Give us your e-mail and we will send it to you.

By sending your e-mail address you consent to the processing of your personal data.