TechniStone® combines selected high-quality natural raw materials with state-of-the-art mixing and molding technologies. This creates a product that combines the creativity of nature and the durability of modern materials.

Customers highly appreciate features of TechniStone® including its: non absorption and porosity, or high resistance to scratches and chemicals, as well as a wide variety of colors and finishes, thickness and size variability. The use of quartz is found in: the interior and exterior, in private or public projects and in industrial buildings, most often in the form of kitchen and bathroom countertops, pavers, stairs, tiles, etc.

You can choose from any one of our many collections. The noble collection advances the design of the interior thanks to its luxurious color shades. The Starlight collection’s shine really adds character to the space. Combining attractive natural granites and siliceous sands, the extraordinary and yet practical Rustic collection is always a favorite.

The Noble Collection expresses a perfect balance between the dynamics within the beauty of nature’s phenomena and 21stcentury technology. The collection gives rise to a new generation of marbled patterns with the special characteristics of engineered stone. Our innovative colors are centered on shades of greys and browns with such amazing depth, it brings home a true to life 3D effect. Nobles are offered in luxury shades of white, beige and brown, with delicate hints of elegant grey or black lines completing the look.

See all colors from the Noble Collection » 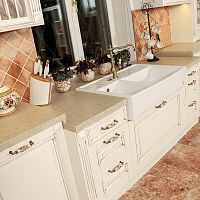 The Essential Collection includes materials from the Crystal, Sand and Mirrors production groups with shades from the whitest white to black with the grains of sand. Materials from the Crystal production group are manufactured from one of the hardest mineral – translucent or other type of the natural sorted quartz which is imported from the top-quality quartz producing regions in the world. Products with the trade names of Gobi and Elegant are fashioned from sorted siliceous sands and its main characteristic is a fine surface structure. Typical characteristics are a rough structure with visible mirror chips and of course the connection of the seemingly opposite – beauty and resistance, design and functionality.

See all colors from the Essential Collection » 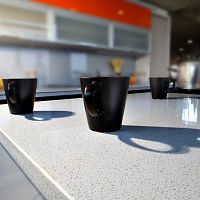 The world has again been enchanted by the Terazzo motif. The design that was previously popular in architecture is returning to conquer interior design. Fabrics, wallpapers, decorations, furniture, accessories - patterns of colour fractions on a uniform background have come to dominate the aesthetic dimensions of interior space, including kitchen countertops, backstops and wall tiles, bathroom tops, paving and other options ideally suited for the application of TechniStone® quartz.

See all colors from the Terazzo Collection » 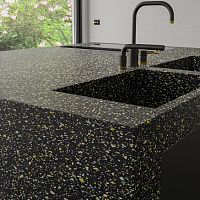 This Non-traditional design allows for the connection of high-tech products and traditional materials. The high gloss, shimmering surface is accentuated by mirror chips. The Starlight Collection has a typical structure which lights up your interior and instantly enhances the character of any space. Starlight materials are very popular and often used for countertops, vanity tops, tiles, stairs, and have recently made their strong resurgence in commercial projects.

See all colors from the Starlight Collection » 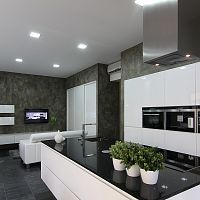 When you take the natural and massive granite look with high strength and combine it with a practical non-absorbent surface, what do you get? Nature improved. With the combination of attractive natural granites and siliceous sands the surface structure is elegant and practical, displaying style and power.

See all colors from the Rustic Collection » 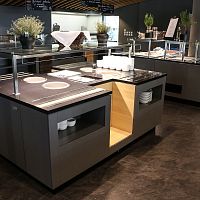 Inspired by the most beautiful mountain ranges from around the world; the collection brings to life their natural constituents such as sandstone, marlstone and marble. The name Harmonia says it all, instantly creating an environment of peace and solitude within almost any space. Products are in accordance with the requirements for high strength, low absorption and color consistency all while keeping an attractive natural look. A wide color range with a soft grainy structure provides a very subtle and luxury impression.

See all colors from the Harmonia Collection » 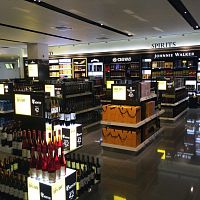 Special surfaces are suitable for interior use such as kitchen and vanity worktops, cladding, tiles, window ledges. Please note that slabs with a special surface are to be impregnated.

Request the availability at sales@technistone.com. 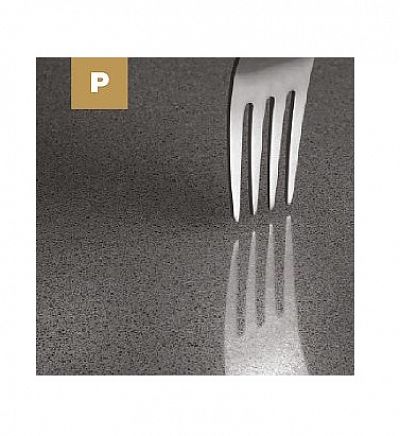 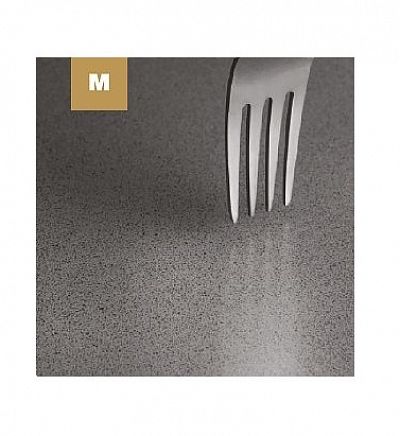 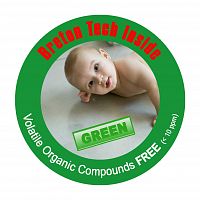 High-quality, nonporous, composite material, built-up from hard, inorganic, polishablegranulates, compactly bound together with a binder and a filler, colored with various pigments, having a smooth, resistant surface, in a variety of sizes and with a wide range of applications.

Quartz surfaces -depend on the Product Group, but are generally:

Technistone ensures that all of our Resin manufactures are in compliance with EU REACH.

Our laboratory the following tests are performed for every batch of incoming resin:

Product testing according to European standards

Dried specimen is weighted in air and immersed in water. Quotient of both values is the weight per volume unit of a material including voids - apparent density.

The mass of water absorbed by the material, under specified conditions, expressed as a percentage of the mass of the dry material.

Relations: Depends on absorption of used raw chips (granite / quartz / glass). Refers to ability to absorb liquid into material, thus level of resistance to staining, resistance to general surface uncleaning, simplicity of maintenance, resistance to bacteria growth and changing of other mechanical and physical properties due to liquid presence in material.

Flexural strength, also known as modulus of rupture or bend strength is measured in terms of stress, and thus is expressed in units of pressure. The value represents the highest stress experienced within the material at its moment of rupture.

Relations: Flexural strength value refers to strength and flexibility of material, thus its resistance to break or to load.

When the temperature of a material changes, the energy stored in the bonds between atoms changes, so does the length of the molecular bonds. As a result, solids typically expand in response to heating and contract on cooling; this dimensional response to temperature change is expressed by its coefficient of thermal expansion

Relations: Refers to changing of the product size by thermal influence. The most important for construction and design of floor and wall claddings (dilatation, fixing system…).

The use of the thermal expansion coefficient ά during the calculation:

20/20 cm body is placed in the center of the vessel in sand. Steel ball (1 kg) is allowed to fall. The height of drop shall be measured between the lowest point of the ball and surface impact. The test is being repeated (increased height of falling ball) until the sample breaks.

20 cycles of product have to be performed by 18 hours heating to 70 or 105 °C, then 6 hours immersion in water of 15 °C. After test product look, stains, color change, cracks, weight and flexural strength are evaluated.

Relations: The ability of a material to stand up mechanical action such as rubbing, scraping, or erosion, which tends progressively to remove material from its surface. This ability helps to maintain the material's original appearance and structure. Refers to surface resistance to scratches, cuts, gloss deterioration….

Measuring walkway surface traction. This test is used for testing slip resistance of a surface to shoe or foot traffic tested on a ramp.

Relations: One of the key components of safety is defining how slippery the floor is; this is known as its 'slip resistance'.

Ramp Test: The Ramp Test is split into DIN 51130 Shod and DIN 51097 Barefoot.
This method of testing slip resistance involves test subjects wearing standard soled boots (shod) on an oily floor surface or barefoot on a wet ‘soapy’ floor surface; the floor is then inclined gradually until they slip. The ramp test is useful for measuring slip resistance in industrial areas and in wet areas, such as swimming pools.

Determination of product dimensional stability by measurement of possible vertical movement of tile edges against reference plane by influence of moisture during 24 hours. Measured movements are evaluated to 3 classes A - C.

Relations: Mainly refers to behavior of tiles after fixing to wet glue. Based on reached class proper glue has to be used.
All TechniStone® products are classified in class A.
Source: TZÚS Plzeň institute Czech republic

Flammability is defined at how easily something will burn or ignite, causing fire or combustion. The degree of difficulty required to cause the combustion of a substance is subject to quantification through fire testing.

Relations: Engineered stone is generally classified in class B due to resin content, nature stone is in class A. This fact has to be respected according to national building construction regulation, might be applied in flooring, mostly does not effect in counters using.

TechniStone® possibilities: Technistone a.s. finished R&D of new product for exterior wall claddings with flammability classification A2-s1, d0Projects with special requirements are possible to arrange production of standard products with this treatment too.This product has to be used as a floor, wall or construction element, not as a counter for direct food contact.

25 cycles of product exposure have to be performed by 4 hours freezing to - 20 °C then at least 4 hours immersion in water of 20 °C. Result is expressed as coefficient of decreasing / increasing of flexural strength value before and after testing. Due to resin content values range around 1 (no influence).

Relations: Refers to material resistance against freeze and thaw which can lead to many failures in materials.Quartz based engineered stone is completely resistant.

Surface gloss comparison before and after 8 hours of chemical influence (HCl, NaOH) expressed in gloss decrease in %, evaluate into class.

Do you want to know how TechniStone® might look in your kitchen, living room, bathroom or anywhere else? Try out our visualizer to get a better idea of using TechniStone®.

Are you searching for professional information, technical materials, or graphic data for your project?

Get advised of any Technistone® quartz data, best practices requested for your residential or commercial projects

Walk through kitchens, bathrooms and other projects with Technistone® designs